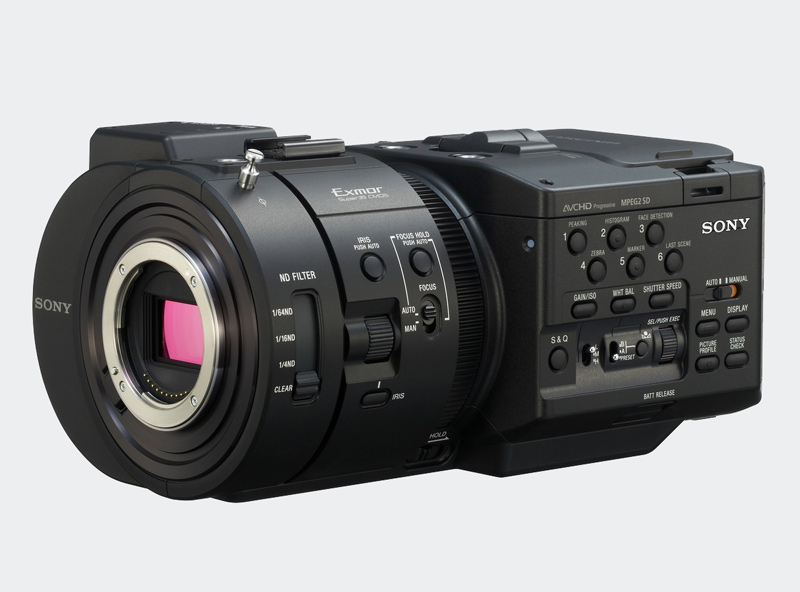 When I bought my pair of Sony NEX-FS100 video cameras last August I knew there were going to be trade-offs when I compared the way I shot video on the camcorders I had used over the previous ten years and my new FS100 workflow.  For starters, the FS100 and its large Super35 sensor allow a much shallower depth of field than was ever possible on puny 1/3″ sensors that were the staple of ever Sony and Canon camcorder I have ever owned.  A shallow depth of field has a beautiful filmic look to it and allows my subject to “pop” from the frame but the trade-off is that critical focus can be challenging and difficult to nail with moving subjects.  But the noise-free image from the FS100 is what convinced me that no matter what the trade-offs, the FS100 was the camera for me.

I have to say I am a bit surprised that Sony is announcing the FS700 so soon after the FS100, mostly because the FS100 is still a work in progress.  The long awaited firmware update that was due to be released March 23rd was delayed on March 23rd to April 19th – I’m still a bit miffed at Sony for waiting until the last moment before announcing the delay.  I’m speculating that part of the reason why the firmware was delayed is that it would have revealed a new feature that is available on the FS100 and Sony didn’t want to have the FS100 steal the thunder from a new product launch.  So I wouldn’t be too surprised if the Sony firmware for the FS100 adds another feature that isn’t on this official list: Sony FS700 features with my comments

This is preliminary information. All features and specifications are subject to change without notice.

The first 4K-ready Super35mm camcorder in its class – providing an assured upgrade path to 4K acquisition and delivery – with full HD 1080p for today. The camcorder will also have the capability to produce 4K RAW 3G-SDI output via a future upgrade.

While I don’t need 4k for my video work as it is not destined for a 4K movie screen, the ability to capture 4k on an external recorder means better green screen keying in my 1080P productions.

10x Super slow motion is cool at 1080P resolution, although I have to admit I haven’t used this feature often on either my old Sony Z7U or my current Sony FS100. Note to self: do more slo-mo video…

The E-mount interchangeable lens system utilizes an extremely short flange back distance allowing you to use a huge array of lenses via a range of adaptors giving you almost unlimited creative options.

Not really new news as the FS100 has the same mount. But I can’t wait for Sony to finally release the FS100 firmware update to support the LA-EA2 adapter. The supplied SEL18200 (E 18–200mm F3.5–6.3 OSS) with the NEX-FS100EK boasts 11x zoom power, a quiet AF motor for cleaner sound recording, and Optical SteadyShot™ image stabilization with an advanced Active mode that lets you take steady handheld shots while walking around — even without a bulky stabilization rig.

I don’t really like this lens and didn’t buy one with my pair of FS100s. My brother bought it, so I have used it, but neither of us like it. Too slow and AF not great but it is an 11x lens and the rest of my lenses are 3x so there is a place for the kit lens but I try to avoid having to use it by simply shooting with two or three cameras equipped with lenses that cover different focal ranges.

The Sony LA-EA2 A-mount lens adapter allows you to use the wide range of high quality alpha lenses and take advantage of the auto focus function for quicker, more convenient operation.

Three times in one article makes a rant… give me my new firmware please so I can gain smooth iris controls and PDAF.

I thought it wasn’t possible to put ND filters with an E-mount system because of the shallow flange-back distance. At least that is the Sony marketing juice that I drank when I bought my FS100. Seriously though, this is cool and one of the two reasons I am considering upgrading my FS100s to FS700s when they are released in June 2012.

The other big feature for me is the addition of HD-SDI outputs in addition to HDMI outputs. The NXCAM NX5U has this feature and the FS100 should have so I’m glad the FS700 will. The HD-SDI bayonet output is a much more stable connection than HDMI and when I’ live switching and/or webcasting I can’t afford to lose a connection. I also appreciate – no, REALLY APPRECIATE – having both the HDMI and HD-SDI outputs live at the same time. Since the Z1U, Sony has been limiting the amount of live video outputs using what they call a priority output. This meant that you couldn’t output HDMI and Component HD on Z1/7/5 models at the same time, which really sucks when you want to run an external recorder, HDMI monitor, give a live IMAG feed, or send your feed to a video switcher because you could only do one. On my FS100 I had been splitting the HDMI output but the if one of the HDMI outputs was disconnected it meant that I momentarily lost all the other HDMI outputs on the same connection. HD-SDI means I can take the HD-SDI feed (also much easier for cabling than HDMI) for my video switcher and leave the HDMI for my operator’s external monitor. The NEX-FS700EK has a refined ergonomic design with a robust detachable handle and grip.

I can’t be worse than the hand-held ergonomics on the FS100 but I doubt I’ll be able to hand hold it, mostly because of the stupid placement of the LCD screen. I know some people like the top placement but unless you are taller than everyone you are filming (which I am most certainly not, at 5’5″), a top mounted LCD means the highest I can hold my FS100 and still see what I am filming is at nose level. As a result I travel with a riser so I can get high enough to see my LCD and get a good vantage point. The NEX-FS700EK is switchable between 50 Hz and 60Hz to allow 24p shooting in PAL areas and no PAL/NTSC limitations.

So will the FS100 when the firmware comes out on April 19.

Expanded focus improvement allowing 4x and 8x magnification and a moveable area of expansion for easy focusing with shallow depth of field.

This is hugely important for critical focus, especially when you aren’t using an external HDMI or HD-SDI monitor or if you are the camera operator on the wide-shot.

Tell me what you see in the images below that you don’t on the Sony FS100.

Need a hint? I see a zoom rocker on the optional hand grip, which is basically a LANC controller. This is a standard feature on camcorders with servo lenses but remember that the FS100 & FS700 have a native E-mount lens mount and there are currently no E-mount lenses with servo controls. So is this a hint to what we will see in the future? A servo zoom on the E-mount would be a nice addition, especially if the lens is a fast f/2.8 parfocal lens with a longer focal range than the 3x options on the market that fit this description. I’ll take a fast lens with a longer range over the servo any day but this is at least interesting.

Let me close by sharing my biggest wish for the Sony FS700 and FS100 models: I would love to see a 5x or 6x F/4.0 Alpha-mount lens that is parfocal and has in-lens stabilization. Sigma is the only company that makes Alpha mount lenses that have Optical Stabilization (OS) and they currently don’t have anything in their line-up like the Canon 28-105 F/4 lens or the old Minolta AF 28-135mm f/4-4.5 lens but I can still hold out hope.