How to manage more than a handful of microphone sources on a panel discussion using a digital audio mixer with the assistance of an automatic microphone signal mixer.

BC Housing launched Let’s Talk Housing B.C. as a new online engagement site to allow residents and stakeholders the opportunity to contribute ideas and feedback on housing issues and projects related to supporting housing. In November 2018 and April 2019, SLV produced the first two online Q&A live streams for Nanaimo and Maple Ridge. From a technical perspective, both live streams were similar in that they were large panel discussions with 7-8 speakers being on-set at the same time and all the speakers required microphones. SLV worked with BC Housing and the venues in Nanaimo and Surrey (for the Maple Ridge session) for on set-decor. SLV provided the lighting, audio, and video equipment. No other vendors were involved.

YouTube Live was chosen by the client as the live stream broadcast service because they already have an online presence on YouTube.

SLV used 4 professional Sony 4K/HD video cameras in order to provide sufficient coverage of these large panel discussions. For audio, wireless Sennheiser lavaliere and handheld microphones were used. The most significant change between the first broadcast and the second broadcast was an upgrade to the sound board. The first sound board was a Zoom LiveTrak L-12. It was chosen because it has 8 XLR audio inputs and SLV’s usual Mackie and Behringer analogue sound boards only have between 4-6 XLR inputs. The Zoom sound board worked really well but having so many open lavaliere microphones would result in a significant noise floor so SLV’s sound engineer had to manually ride the levels on each microphone input. This worked well when the flow was predictable and the conversation went from the moderator to a panelist and then back, but left room for improvement when a fellow-panelist wanted to jump-in.

For the second broadcast SLV changed the sound board to a Behringer X-18 that has 16 XLR inputs, and most importantly, has an auto mixing feature.

There are two main benefits of audio auto mixing:

Below are some behind-the-scenes photos, screen shots, and the full-length panel discussion webcast video. 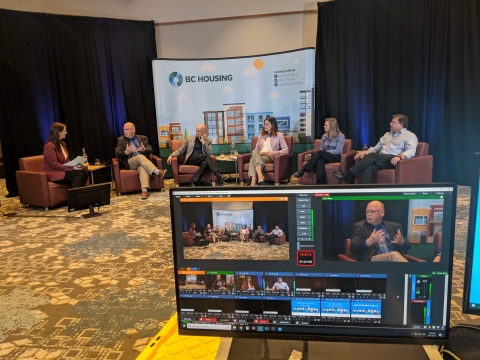 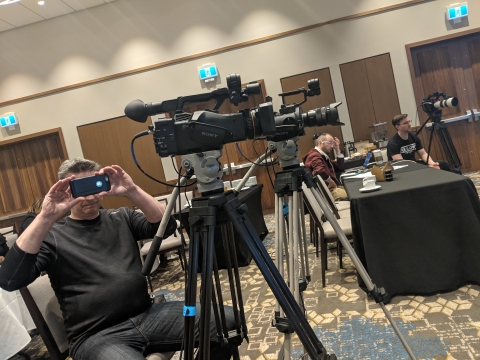 3 of the 4 professional Sony video cameras. 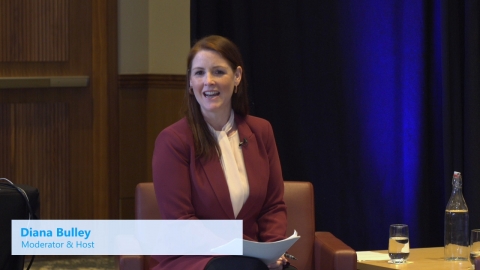 Screen capture of the moderator with a lower-third graphic. 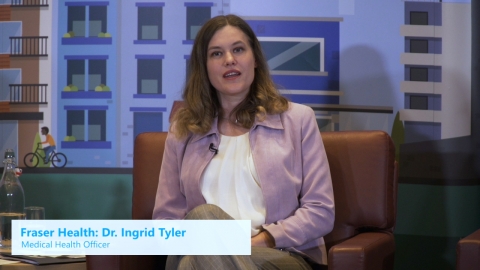 Screen capture of one of the panelists with a lower-third graphic. 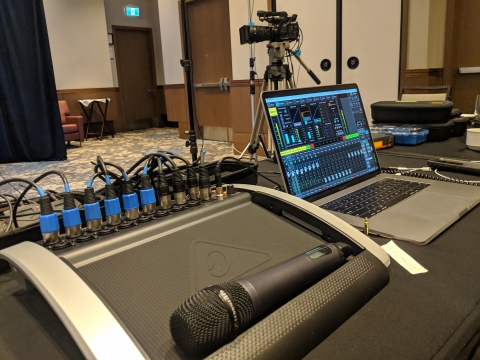 The Behringer X18 has an auto mixing feature that reduces the noise floor when using multiple microphones.

The finished product was this 90 minute webcast on YouTube Live.

If you have a panel discussion or another similar project that you would like to webcast, please contact SLV for a custom quotation.