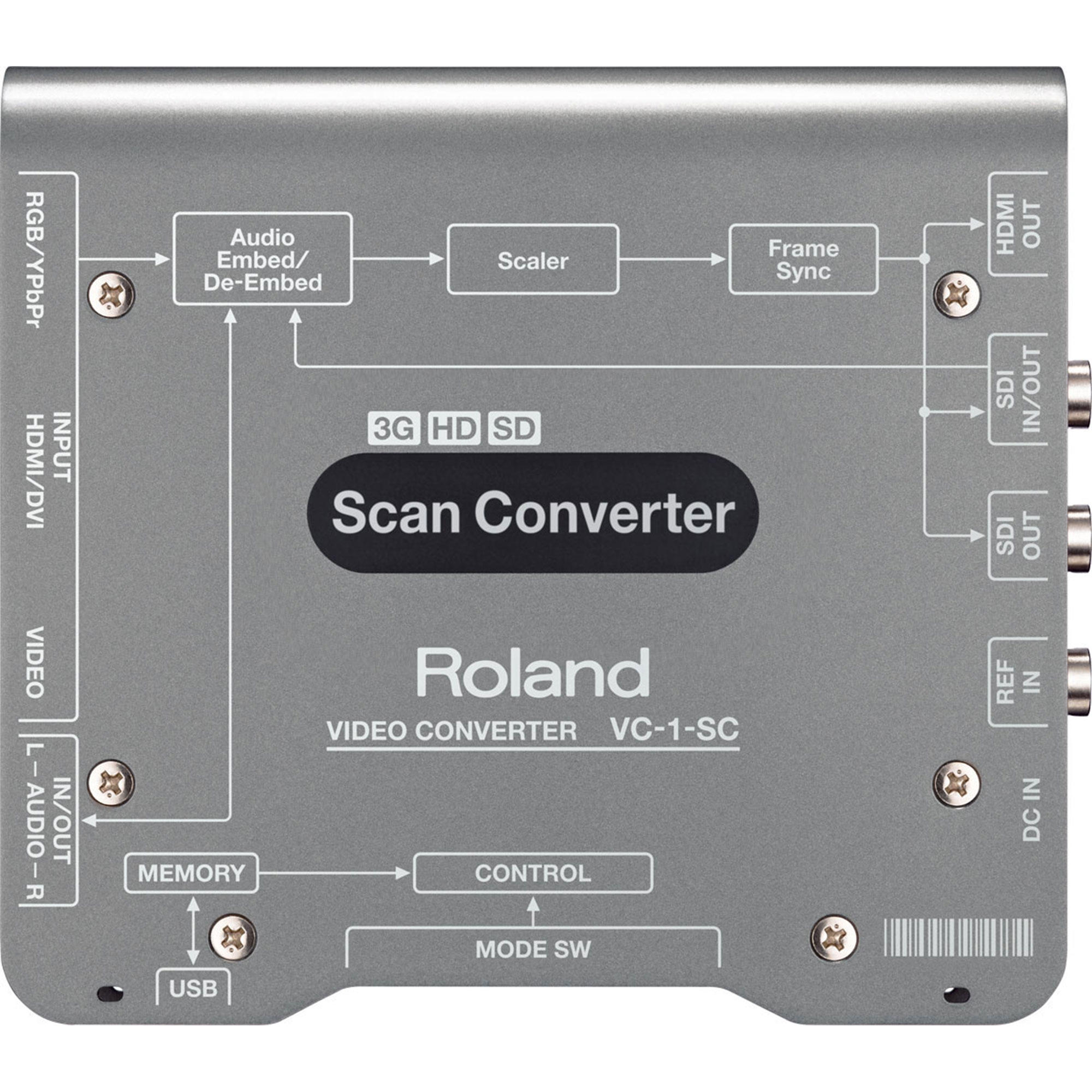 This article appears in its entirety on Streaming Media Producer.

Rather than tempt you with the Next Big Thing, in this “Gear of the Year” feature we invited three contributing writers—and producers in their own right—to choose four products each, all released in the last year, that have proven themselves indispensable to professional online video production and webcasting workflows, or represent the best currently available choices in their particular category.

As a webcast producer, one of my biggest challenges is dealing with VGA inputs from computer presentations. The VGA signal requires conversion, and scaling so that my video switcher can recognize the signal. The Roland VC-1-SC (below) is unique in that it solves the VGA-to-HD-SDI conversion challenge that can often require the use of multiple converters and it isn’t limited, like some of its competitors are, to a small range of VGA input resolutions. Surprisingly, most of its competitors don’t support VGA inputs of the most desired 1080 and 720 video resolutions.

VGA-to-HD-SDI conversion is required for video switchers that lack VGA (or analog DVI) inputs and internal scalers. HD-SDI is the preferred HD connection, and although VGA can easily be converted to analog DVI with a simple passive converter, having an actual VGA input is preferred. The same is true for VGA-to-HDMI converters; you can take the HDMI output and convert it to HD-SDI, but video professionals want direct connections using professional cables. HDMI is a consumer connection, and additional HDMI to HD-SDI conversions don’t circumvent its limitations.

Despite the complications these connectivity issues create for webcast producers, there are currently only three professional VGA-to-SDI converters available, and two of them were announced in the summer 2013. The only pre-2013 option, the $1,000 Kramer VP-483, gets the job done with a single VGA input-to-dual HD-SDI outputs, and it has convenient buttons that make scaling the output to 720P or 1080P easy. Unfortunately, it lacks additional inputs and outputs that the two 2013 models do.

The Datavideo DAC-70 adds both HDMI and HD-SDI inputs and outputs and has an attractive $500 price tag, which is likely one of the reasons it is currently backordered, but unfortunately it suffers from one tragic and potentially limiting flaw: like the popular Grass Valley ADVC G1, a DVI and HDMI-to-HD-SDI converter, the DAC-70 accepts only a limited range of VGA resolution inputs. Both of these models lack support for 1920×1080 and 1280×720 VGA signals. This means that if your VGA computer input is already in one of the two official HD resolutions, you’re out of luck. The DAC-70 is also limited to a 60Hz refresh rate.

The $1,000 Roland VC-1-SC—also released last summer—features additional HDMI and HD-SDI input and output options like the DAC-70, but also supports 1080 and 720 video resolutions. When you combine this with support for even more computer resolutions than the Datavideo model does, and additional refresh rates that aren’t 60Hz, the Roland VC-1-SC provides producers with a much more compatible and versatile converter, scaler, and distribution amplifier option than any other available solution.

As much as I love my large-sensor video cameras, I miss the small camcorder form factor and the ability to work with long zoom lenses. My Sony FS700 and FS100 just weren’t designed to be handheld; their lack of a side-mounted LCD screen and limited native E-mount lens selection—necessitating the use of non-stabilized lenses for most professional productions—makes handholding much more difficult than with traditional camcorders. A large sensor also limits zoom lens selection, especially at the telephoto end. A typical DSLR zoom lens that is appropriate for video has a 3x zoom, and most top-out at 200mm, or 300mm in a 35mm equivalent.

I like the Canon XA25 (below) for its 20x zoom lens (35mm equivalent of 576mm) that has a maximum aperture of f/1.8 wide and f/2.8 zoomed in. By comparison, the Sony 20x G series servo zoom lens models, like the Sony NX5U, ramp down from f/1.6-f/3.4 and this translates into a half-stop advantage for the Canon XA25 on the long end of the lens, where it matters the most. Canon also employs two stabilization methods, similar to the Sony NX30, but that camera has only a 10x optical zoom lens. The Canon stabilization is so effective that during my testing, handheld I was able to track dolphins swimming in the ocean and airplanes flying in the sky, while being almost fully zoomed in, and from atop a cruise ship. 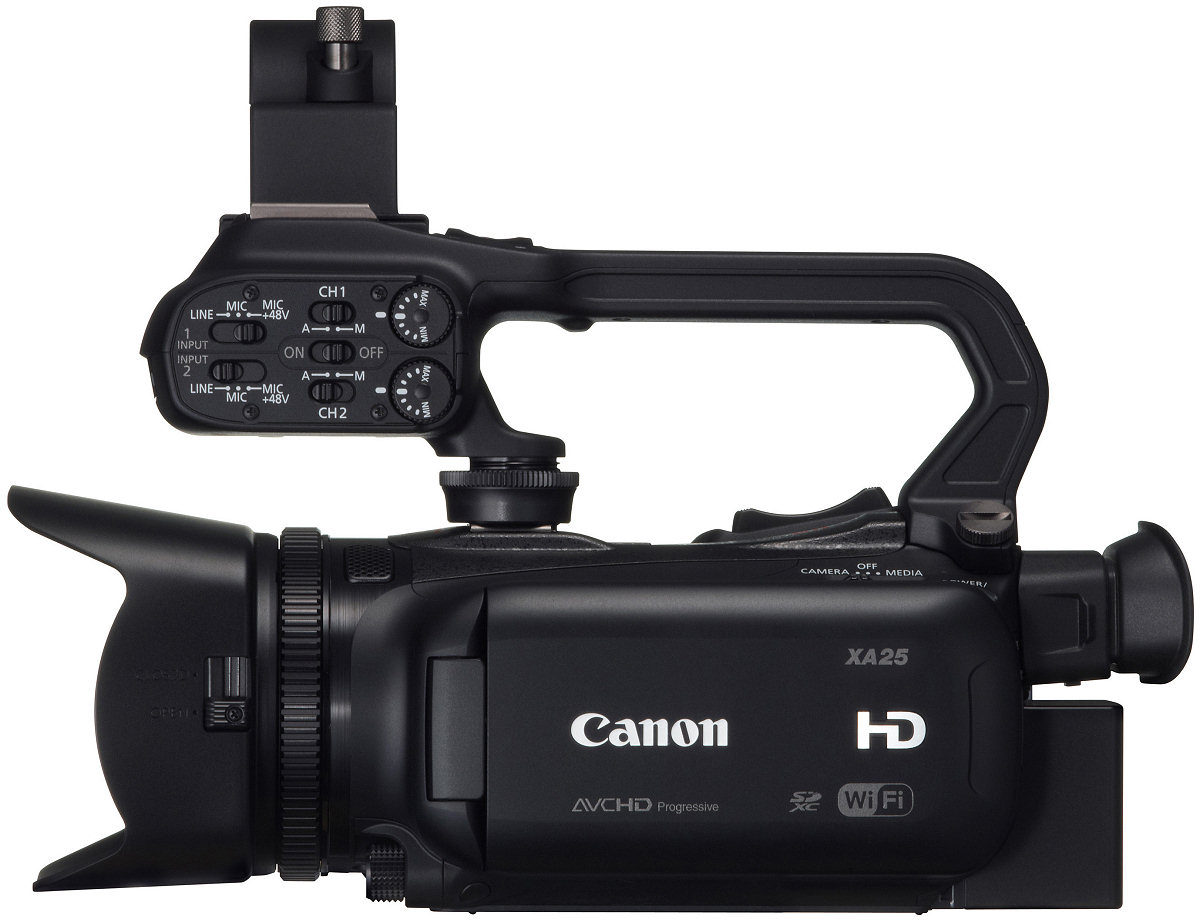 The WiFi feature allows remote browser-based control and live view of the camera image. This WiFi creates some very exciting possibilities for unique POV shots, remote operation of multiple cameras, and wireless transmission of video without additional upgrades or investment. Admittedly, the live view frame rate is webcam-esque, but in some applications this is sufficient. The internal gradiation filter is a nice touch, engaging automatically when you close the iris wheel beyond the camera’s f/4.0 sweet spot to offer 1, 2, or 3 stops of f-stop reduction.

The OLED screen is gorgeous and XLR inputs allow for professional audio connections but while there is an HD-SDI connection, in addition to the mini-HDMI output, both digital outputs leave something to be desired when considering professional connection standards and preferences. The Mini-HDMI output does offer 1080p frame rate options, but being a mini connector, requires a mini connector cable, and this isn’t currently standard in most A/V kits or easy to replace in a pinch if you ever need. The HD-SDI output is SMPTE 292M (1.5G HD-SDI) and unfortunately is limited to 108060i outputs, instead of the more desired SMPTE 424M standard (3G HD-SDI).

If you can live with 1.5G 1080 60i, then it’s hard to beat the $2,500 Canon XA25 for webcasting because HD-SDI output cameras usually command a premium over their otherwise-equivalent HDMI siblings, if they’re offered at all. The XA25 is about $800 less than its closest HD-SDI competitor. But if you need progressive video support then you might want to look at the $2,000 Canon XA20 and convert the mini-HDMI output to a progressive HD-SDI signal with a format converter.

It’s safe to say that CRT televisions are obsolete, having been replaced by LCD, Plasma, and recently OLED technologies. The same goes for CCD sensors, which have been replaced by CMOS sensors in both video and still cameras. Both these new imaging and display technologies use progressive scan to display video but unfortunately many of the components that are part of video switching and webcast workflow are still stuck with interlace scan technology based on SMPTE 292M (1.5G HD-SDI).

Blackmagic Design took the bold move of augmenting its ATEM line of video switchers with two models that support 3G HD-SDI and 6G HD-SDI. 1080p video support moves Blackmagic Design ahead of the of popular 1.5G HD-SDI video switcher models like the Sony MCS-8M and Panasonic AG-HMX100, and UltraHD 3830×2160 support leapfrogs Blackmagic way ahead, reassuring its buyers that this model won’t soon be obsolete. And with a price of $2,495, this 10-input switcher (below)–10 HD-SDI with one input switchable to 4K HDMI–costs a fraction of what its competition does.

Software control panels keep costs low and up to six network connected computers or laptops can operate the software controls. But plan on pairing this device with a VGA converter/scaler for legacy computer inputs and make sure all your video inputs match the same frame rate and resolution because the ATEM line doesn’t have any internal scalers, and tally light outputs require an additional GPI and Tally Interface box.

One of the big challenges of webcasting is that you’re expected to be able to support myriad video inputs in both the digital and analog realm. This requires format and scan converters as well as video scalers. VGA computer signals are among the most challenging to input in an HD workflow, and true VGA support is something that the leading all-in-one studio-in-a-box switcher and webcast encoder lacks. Despite the VGA standard being able to support 1080p and 720p resolutions, many VGA-to-HDMI and VGA-to-HD-SDI converters don’t support those two specific resolutions. The VGA resolution then has to be changed to something “close” that is supported but is in a different aspect ratio and then requires scaling and inevitably a pillar box or a letter box set of bars.

The fact that the Roland VR50-HD (below) supports half-a-dozen VGA resolutions, including 720p and 1080p, means that it can handle most any analog computer input those A/V techs who run the projections screens and a presentation switcher throw your way. But when you consider that the VR50-HD also has a Program and Aux VGA output, you could easily replace that tech and their presentation mixer, while mixing up to 12 channels of audio on the integrated digital audio mixer for the PA speakers, and outputting a USB 2.0 or 3.0 signal to your computer for webcast or archive recording (without requiring a dedicated video capture card).

I don’t want to give you the impression that the VR50 HD is a VGA switcher—although that is one of its standout features, along with legacy composite video inputs, all scaled internally if required. The VR50-HD is a modern HD video switcher with HDMI and HD-SDI video inputs and outputs; it supports up to 1080p60 video, while most of its competition is limited to interlaced HD video resolutions. There are a lot of additional nice touches too, such as a separate audio level adjustment for the USB output, a 5-light VU audio level meter, a built-in 7″ preview touch monitor, HDCP support for mixing copyright content to the HDMI (only) output, and even a pair headphone jack outputs in 3.5mm and 1/4″ sizes different sizes so you don’t have to remember to bring your adapters.

My only minor qualms with this switcher are that it has only 4 video channels (6 when not using compositing features like PinP or Key) and its lack of tally light support. But it’s hard to complain about a switcher that does so much and eliminates the need for thousands of dollars’ worth of converters, scalers, adapters, audio mixers, sub-video mixers, and webcast capture cards, all for $7,495.