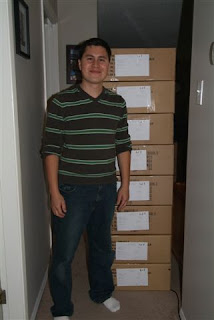 I consider May and June my dance recital season as this year it has been especially busy. Although my dance numbers grew, thanks to a new system I implemented with Spiral Dance Co that saw me ship 1,588 DVDs to them this week (and hitting my self-imposed 3 week deadline), my unusual busyness has been due to growth in other markets. But in an effort to explain the goofy photo of me standing in front of a bunch of boxes – those are the 1,588 DVDs moments before the courier arrived – They stood 5’6″.

So where has the growth come from? Some of it came from new stage performance clients, a broadway musical concert & a Cantonese opera, but the rest has been from corporate video production clients.

In late May I had a crew start filming interviews in Scotland and in early June I continued the project with interviews in Vancouver for consulting firm RLG international‘s 25th anniversary. Additional interviews are scheduled at US locations this summer.

The following week I was in Whistler for Safe Software’s FME User Conference and we live switched our video of the speakers with their software demos and PowerPoint presentations. This was an especially challenging shoot as we were doing this in two rooms at the same time. Everything went smoothly and we even found sound time to record two case studies with users.

Now on Monday I’m going to be filming at video game company Electronic Arts for a press event to launch new titles Grand Slam Tennis, FIFA 10, NBA Live 10, & NHL 10. One of my key roles will be to document Matt from Stack Media as he interviews the Orlando Magic’s Dwight Howard.