This article was originally published on Streaming Media Producer.

People are buzzing about the Sony a7S, so Streaming Media Producer is launching a comprehensive three-part review. In this first part, we’ll examine lens options for the Sony a7S and related cameras, as well as what to look for in a video lens.

Everyone is talking about the Sony α7S, Sony’s newest interchangeable lens camera with a full frame E-mount. Formally, it is known as the Sony ILCE-7S and much of the talk for video professionals surrounds two key features: The ISO range of 200-102,400 (expandable to 409,600) & the 4K QFHD micro HDMI output. When you delve a bit deeper into this camera’s offerings you will also appreciate the XAVC-S 50Mbps internal codec at up to 1080 60P (100P for 50i models) and the availability of the S-Log2 Picture Profile to expand the dynamic range that already bests everything else in its class.

These features are the basis for what makes the Sony α7S stand-out but little has been said about lens options for the α7S and its professional Super35mm professional video camera cousins, the Sony NEX-FS700, FS700R, and FS100. For starters, there are very few E-mount lenses and even fewer full frame E-mount lenses. To make matters worse, most E-mount lenses are consumer grade lenses. Sony knew this would be a problem when they developed the E-mount system, so their solution was to develop a line of smart adapters to adapt the long-standing α-mount line of lenses that owe their legacy to Minolta and then Konica-Minolta, to the E-mount system. 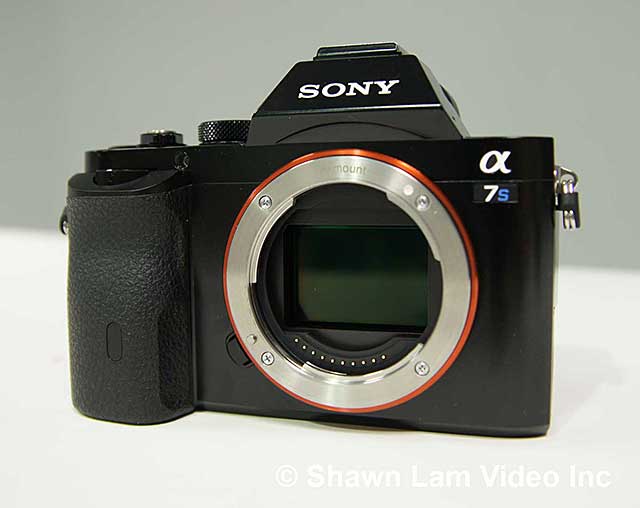 The Sony α7S has the first full frame sensor designed for video.

In this article, the first in a three part series on the Sony α7S for Streaming Media Producer, I will discuss what to look for in a video lens, as this is very different than what photographers look for and renders a lot of the discussion on popular photo review websites irrelevant in the video world. The shallow flange back of the E-mount means there are lots of options but this also means lots of trade-offs so I’m going to devote an entire article to the discussion of what to look for in a video lens for E-mount video cameras, although a lot of this discussion is relevant to all video shooters who use Canon, Nikon, and Panasonic DSLRs and mirrorless cameras.

I part two I will explore lens and mount combinations for the Sony α7S from a videographer’s perspective and share my favourite video lenses that I use on the FS100, FS700 and now Sony α7S. In Part three I will conclude this series with a review the α7S as a video camera, including a comparison of the Sony α7S to the Sony NEX-FS700 video camera.

The Sony α7S is not Sony’s first full frame e-mount camera but its NEX-VG900 camcorder form factor model didn’t really catch-on. The VG900’s issue was that its 24.3 MP full frame sensor wasn’t suited for video work because it oversampled too much and, like DSLRs used for video, it suffers from moiré and aliasing. This is a result of the processor line skipping that is required as the camera is not able to process all the additional pixel information at 24, 30, or 60 frames per second. As a result, the FS100 & FS700/R with their native 3.4MP and 11.6MP Super35mm video sensors attracted more attention and sales and ultimately, render better quality video. More recently, the α7 and α7R respectively feature 24.3MP and 36.4MP sensors but they are marketed and designed more for photographers and in video mode, resort to line skipping, which degrades the video quality. By comparison, the α7S has a full frame 12.2MP sensor and one designed to deliver uncompromised video quality. The result is arguably the best full frame video camera on the market today and one that bests most Super35mm sensor cameras in terms of video quality, many of which cost tens of thousands of dollars more. This is quite the accomplishment for the diminutive α7S that retails for $2,500.

The α7S does have an APS-C mode for when you pair it with a crop sensor lens but that negates some of the advantages of using a full frame sensor, like low noise at high ISO and wider focal lengths with a 1.0x crop factor that is the 35mm reference to which we generally compare all other sensors.

The E-mount features a short flange focal distance of 18mm. This short distance is generally less than half the distance of most SLR lenses, which means that you can adapt most lenses to E-mount with a simple adapter. This opens-up a mountain of lens options, which is a good thing as the E-mount lens line-up is not fully built-out yet, especially on the full frame E-mount side, that at the time of this writing only offers five lenses. You don’t have to rely on using only Sony E-mount lenses with the α7S but using non-E-mount lenses means you won’t get electronic controls and communication from the lens to the camera, unless you pair it with a smart adapter than supports this.

Sony launched its NEX line of cameras in 2010 as an APS-C mirrorless still camera. Since then, the E-mount NEX line added video cameras, and more recently full frame E-mount mirrorless cameras and video cameras. Sony dropped the NEX moniker in late 2013 and somewhat confusingly brought their E-mount cameras under their α brand, presumably to draw attention away from the lack of lenses in the E-mount system by suggesting that E-mount cameras work just as well with α-mount lenses with a Sony α to E-mount adapter. Unfortunately, this just isn’t true. 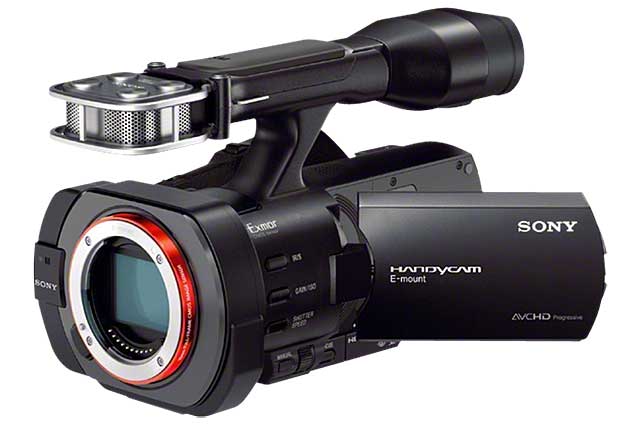 The Sony NEX-VG900 was Sony’s first full frame E-mount video camera but it uses a high resolution photo sensor instead of a video resolution sensor like the one on the Sony α7S.

Four years isn’t a lot of time to develop a full lens line-up, especially when video models that professionals would want to use only came out with the FS100 video camera, subsequent FS700/R, and now with the α7s. To make lens matters worse, full frame (aka Sony FE) lenses only started to be released in late 2013, and the FE lens line-up has few options. So yes, this means that for an entire year, full frame Sony VG900 users had no full frame E-mount lens options to pair with their full frame video camera. VG900 users who wanted full frame coverage had to use α-mount lenses and the included-in-the-box LA-EA3 adapter.

In some ways, photographers have an easier time with lens selection than do videographers because SLR lenses are designed for modern photographers’ needs, often at the expense of what is important to videographers. Whereas for a photographer resolving power and corner sharpness and autofocus speed have always been important in full-frame photography, videographers have needs more similar to photographers of the pre-autofocus photography generation that cared about evenly dampened zoom and focus rings, an actual iris ring on the lens barrel, and especially a true parfocal lens. This is the reason why videographers often prefer vintage manual lenses and this has resulted in an active market for suitable vintage lenses. Some select vintage lenses have appreciated in value well beyond their original purchase price, even after adjusting for inflation, although there are still plenty of reasonable priced lenses out there that make great video lenses.